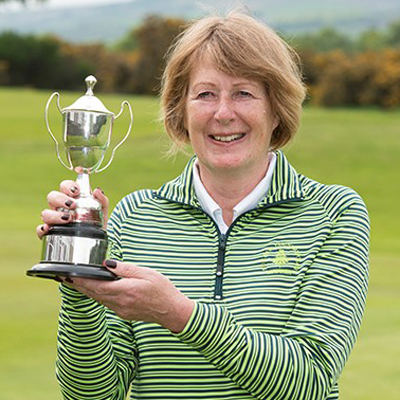 Congratulations to Carol Wild of Notts Ladies who won the Ann Howard Trophy, for Over 60's, at the English Seniors Match Play Championships, played at Hallamshire Golf Club from 14-18 May. She qualified for the matchplay after strong performances in the stroke play rounds. She then won through to the final by beating Sue Penfold of Sherwood Forest in a close semi-final match. Carol met Pat Wrightson from Huddersfield Golf Club in the final and played superb golf, making birdies on 2, 6 and 7. She was 8 up at one point and playing par golf and finally clinched the match with a fantastic score of 7&6.

In the Wendy Taylor competition Midland Vets came through strong, with Julie Brown, Trentham qualifying in 2nd place with superb rounds of 74,75. Debbie Warren followed in 4th place with 75,76. Other qualifiers were Sue Spencer, Whittington Heath - 9th; Catrin Russell, Chevin - 13th; Lindsey Shaw, Chevin; Carol Houghton, The Nottinghamshire and Helen Lowe, Scraptoft. In the match play stage Helen Lowe, Julie Brown and Sue Spencer played their way into the last 16 in some close fought matches. Helen. In the quarter-finals both Julie and Helen were beaten comfortably. Sue Spencer defeated former British champion Katherine Russell in a great match. Sue went into the semi finals feeling confident and in a hard fought match lost to the eventual winner Aileen Greenfield of Pyecombe GC.
Full scores can be found on www.englandgolf.org