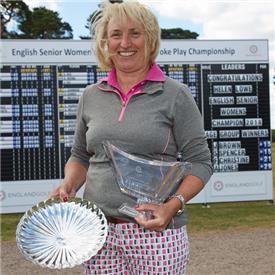 Helen Lowe of Scraptoft GC won her second national title at Belton Park, playing in strong winds. The competition was played from 19th to 21st June 2018. Helen overcame a six shot deficit going into the final round, playing steady golf, to finish with a 1 under par round of 74 and put together 3 decent rounds of 79,75,and 74. Although her confidence wasn’t high going into this tournament, recent lessons have helped and, while others faltered, Helen kept her calm and won by 4 shots from new Midland Vet Tracey Williamson of Royal Cromer. Tracey led after day 1 with the best score of the tournament of -2. However she struggled with the wind on day 2 and was blown off the course, finishing with a birdie to secure second place overall.