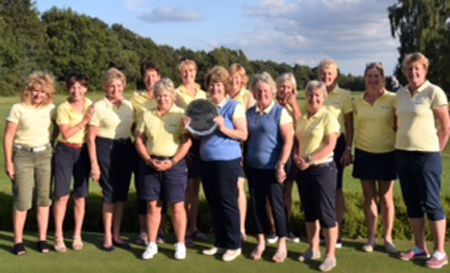 Held at Northamptonshire County Golf Club, a Colt course and ranked in the top 100, what an exciting three days we had experiencing the ups and downs of the matches.The course was presented in wonderful condition despite the challenges posed from the arid summer of last year, with superb greens and many tricky pin placements. After a few thunder storms on the first day, it was beautiful sunshine for the rest of the time.

With an experienced team of Helen Lowe, Tracey Williamson, Sue Spencer, Catrin Russell, Lyndsey Shaw, Debbie Warren and rookie Julia Gaunt there were new pairings which proved very successful. Jenny Deeley, who had recently moved to the Midlands from Jersey stepped in at the last minute when Julie Brown withdrew due to personal reasons.

Day 1 v South
In the morning foursomes, could a good win by Helen and Tracey against two experienced England players in the first match surely be a sign of positive things to come? In the last pairing, Sue and Catrin played faultless golf winning 6&4 and Lindsey and Debbie fought from 5 down to just lose on the 18th.
In the afternoon, Helen led the team and got off to a blistering start, eagling the second hole and quickly won her match 8&7. The next four matches were won, two on the 18th and the last match lost on the 18th. A terrific start with 7 points in hand.

Day 2 v Scotland
Two excellent wins in the morning from Helen and Tracey and another fabulous result from Sue and Catrin with a 6&5 win. Again the third match went to the 18th. In the afternoon, four very steady wins together with a half meant we finished the day with 6.5 points.

Day 3 v North
Another beautiful day and excitement in the air, knowing that a win would be ideal but a draw would too as we were 2.5 pts ahead of the North. Our first two pairings lost but Sue and Catrin kept up their formidable partnership by winning 4&3.
The team were determined and came out fighting although by the 7th hole many of the matches were down. However, going to the 10th hole and loop of 5 holes which can often determine the outcome, the team gradually turned their matches around. Towards the end of the singles, Julia had the first win of 6&5 followed by Lindsey 3&2. So we had just had edged ahead of the North. Helen was battling at the front and from being 2 down, got the match to I up after 17th and won on 18th. Behind her, Sue hit a spectacular shot onto the par 5 16th to turn that match round. A winning putt on the 18th secured a viictory and the Salver. Debbie halved her match and at the rear Tracey had a convincing win of 4&3.

The Midlands won the Miller Stirling Salver with three wins and 20 points which is one of the best winning margins.The Tony Moffat Quaich went to the North with 2 wins and 13.5 points.

We had a fantastic team with a great team spirit. The golf was of the highest level and exciting to watch . It was a great pleasure to be Captain of the team and it is a week that I will remember for a long time. My thanks go to President Sue and my vice-captain, Carol both for their support. Treasurer Sue did a wonderful job with all the computer wizardry and keeping the finances in check.

The week was master minded by our superb secretary Mary who worked tirelessly, with professionalism and tremendous efficiency in ensuring that the week ran smoothly and was a huge success. Thanks must go to Northamptonshire County Golf Club for hosting the Jamboree and all those from the club who have facilitated the smooth running of the event including the green staff, bar and catering team, the ladies section who helped with the hostessing, ball spotting and on course scoring, the referees and also our manager for being our “David Bailey”. Our head professional Tim Rouse was a great support to the Midland Team.

Full results can be found here.