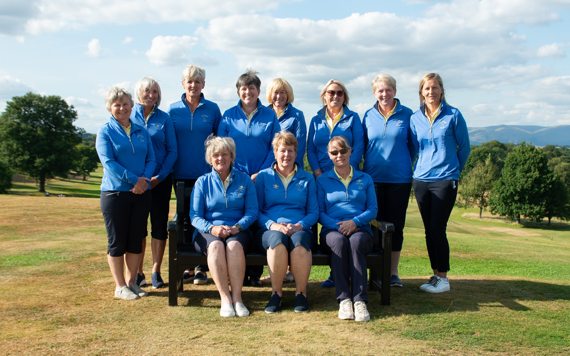 On Tuesday we played the South. All our foursomes partnerships were new. However we had a resounding 3-0 win in the morning. Unfortunately we only managed a 1/2 point in the six singles, courtesy of Helen Lowe, however all the games were close and could have gone either way. On Wednesday undaunted against the North, we played the same foursomes partners and again had a resounding 3-0 win in the morning. It looked promising at one time in the afternoon, but we only managed one win, courtesy of Sophie Beardsall. On Thursday against Scotland we won the foursomes 2-1 and with Sophie winning the top match against the Scottish champion in the afternoon we won 4 matches and halved one, with nail-biting putts for Marcella and Sarah on the 18th.

Our pairings in the foursomes namely Julie Brown and Jenny Deeley, Helen Lowe and Sue Spencer and Sarah Cranton and Julia Gaunt won all their games, which was truly remarkable. The pin positions at Glenbervie were very challenging. The locals had never seen the pins in these positions before. The team spirit was tremendous, everyone pulling for each other. Although we were disappointed not to retain the trophy there were lots of positives to take away. The three newcomers to the team, namely Sophie, Sarah and Marcella all made a significant contribution on and off the course. I was very proud to have Captained such a team.

The South won overall, we were third behind the North. Really it was only a couple of putts that made the difference.
Carol Wild (Captain)