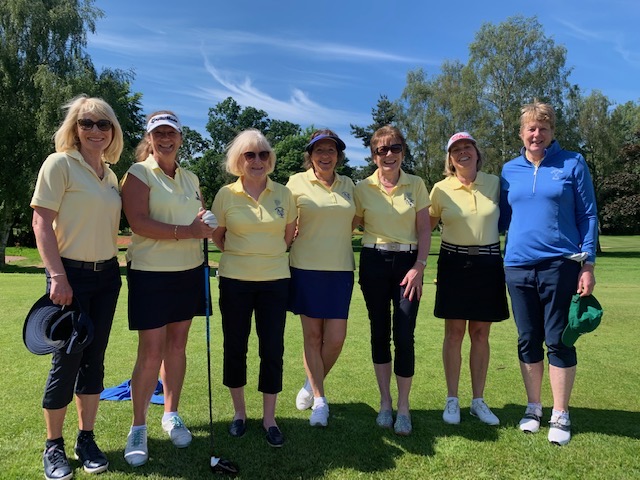 MVLGA County Team Champions from the 2020 Championships played at Thorpeness GC last October were Staffordshire. On 8th June 2021 Staffordshire VLGA hosted a match against the combined might of the other counties in the division. Staffordshire Captain Chris Pettit and President Anne Andrews welcomed the teams to Ingestre Park who had given courtesy of their lovely course to enable this event to take place.

At Edgbaston in 2019 the result of the match between the same teams was a tie. Sadly, not able to travel from Norfolk to play this year was Tracey Williamson, who the following week won the English Seniors Stroke Play Championship at Hayling GC, but with the new MVLGA Champion, Sophie Beardsall, and with the addition of new members, Sally Shayler and Sarah Cranton, the President’s Elect team won the match by 5 matches to 1. Staffordshire were missing members of the winning Jamboree team in 2019, Debbie Warren, Julia Gaunt and Jenny Deeley.

All in all this was a great opportunity for the Association’s elite players to meet up with Captain, Carol Wild, to help her in the quest to retain the Miller Sterling Salver at Glenbervie in August.